Home  :  News : Improvement of Mobility in the Albayda neighborhood

Improvement of Mobility in the Albayda neighborhood 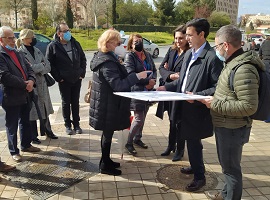 
The City Council of Granada extends to the neighborhood of Albayda the measures for the pacification of road traffic through the implementation of a plan to improve mobility in this area of ​​expansion of the city in which, in addition to including the speed reduction to 30 kilometers per hour on the main roads and 20 kilometers per hour on secondary streets, new loading and unloading areas will be established, new parking spaces and a new reorganization of circulation on some roads.

This was announced by the mayor of Granada, Francisco Cuenca, during a visit this morning to the Albayda neighbourhood, where, after responding to the requests of the residents, he reported on the execution by the Granada City Council of twenty actions aimed at "providing an answer" to an expanding area of ​​the city, with a growing population and the consequent growth of shops and businesses, which require new services from the city .

In this regard, he recalled that the measures are part of the municipal governments commitment to responding to requests from residents, which are our priority -he pointed out- for which "A series of actions aimed at improving mobility and accessibility in the district are being addressed, in coordination with the residents," he said.

Specifically, as reported, the mobility area has already proceeded to the new speed limit signage by implanting optical bands located in the area prior to the pedestrian crossings on Ovidio Street, where a space for motorcycle parking and protective railings have been installed for pedestrians at its intersection with Euripides Street.

In the roundabout that connects Ovidio street with Federico García Lorca avenue, it has been reorganized with the elimination of the outer lane, which has been reserved as a parking area, destined for loading and unloading goods in hours from 8 a.m. to 2 p.m., although the rest of the day will be free parking.

Likewise, a new pedestrian crossing has been installed in the vicinity of the Virgen de las Nieves Secondary Education Institute, located on Francisco Ayala avenue, and work has been carried out on the streets of Journalist Fernando Gómez de la Cruz and Journalist José Fernández Martínez with the creation in the latter of an area reserved for loading and unloading.

The mobility plan launched by the City Council of Granada contemplates, in turn, an intervention in the Plaza de Europa area, where there will be new signage referring to the reduction of speed to 30 kilometers per hour , while the reduction of traffic lanes in the roundabout and the establishment of a space reserved for loading and unloading, as well as parking, are planned.

This last measure will be applied to the existing roundabout in the vicinity of the headquarters of the Granada Chamber of Commerce, where improvements are also planned in the intervention between Luis Miranda Dávalos and La Argentinita Avenue.

The municipal proposal includes improvements to the existing traffic lights in the vicinity of the Granada bus station and addresses, at the request of the residents, the projection of a new pedestrian crossing on Jimena street.

Cuenca has indicated that the plan responds to the needs arising in the Albayda neighbourhood, an area of ​​urban expansion in the city, where, according to his words, there has logically been greater vitality with a a larger population and, consequently, more traffic and more commerce in the area, which require an intervention to improve mobility and accessibility in this neighbourhood.

We are adopting measures aimed at promoting productive development in the face of the difficult situation we are experiencing and supporting small businesses, but also very focused on our neighborhoods, listening to our neighbors, attending to their demands and making decisions and acting to improve their quality of life, has concluded.

Center for the Complete Management of Mobility

Delegation of Citizens Safety and Mobility.
City of Granada